Regarding Race, Nation, and Our Future

Shaping Power — The Woodworks of the Luba Peoples of Central Africa 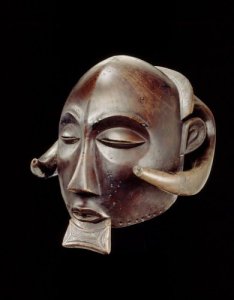 The glorious wooden carvings of the Luba peoples hold within them an indefinable power. They held kings, recorded histories, and united nations. While it is easy to grasp why the masterfully carved woodworks of the Luba held specific and distinct power, it is difficult to fathom– from a Western perspective– how they did it. To the Luba peoples of central Africa, a stool was not merely a stool nor was a scepter merely a scepter. The king’s stool was an embodiment of the Luba Kingdom. The scepter truly WAS the king. The meanings represented by the wooden icons were not simply symbols for the kingdom, they were physical manifestations of its power.

On indefinite loan from the Royal Museum for Central Africa in Belgium, several Luba masterpieces are are on display in “Shaping Power” a new exhibit at the LA County Museum of Art. Now, before describing the show further, it is important to note the source of these masterpieces. The simple fact that traditional African items of cultural and ethnic importance, taken from the region that makes today’s modern Congo, and “on loan” from Belgium is a discussion for another day. I have not written about King Leopold II or his capitalistic massacre of the Kongo people yet, but a quick search of Wikipedia will confirm the irony of this show…

In their time, the craftsmanship of the Luba woodcarvers was unrivaled. Their style was mimicked by artists for miles and their works found their way throughout central Africa. Even world renowned artists such as Picasso would later echo their graceful lines of poised strength. Apart from their purely artistic appeal, they hold an indefinable vibration of hidden meaning.

The pieces are imbued with the spirit of the Luba people, they were imbibed with palm oil and holy medicines, and they meant more to the Luba people than one could possibly comprehend by peering at them through the glass windows of an art museum. Their stools held the sanctity of kingship and their headrests protected dreamers from the threat of witches and evil spirits. The enormous Luba mask, an icon of Luba art, was used for masquerades of judicial decision making and their delicate memory-board was used as a record keeping device for griot historians. These pieces effuse an intrinsic power that is not based merely in their aesthetic beauty. While the pieces could be auctioned off, fetching sums that approach priceless, they hold cultural value that cannot be defined by material worth.

Clifford Geertz in his The Interpretation of Cultures, offers insight into how one can decipher the language of ceremony and cultural practice. Surface layer descriptions and photographic evidence may not depict the true meaning of action within a culture. Instead, he posits that they sometimes deserve a more “thick description.” A wink may not be merely a wink, just as a stool may not be merely a stool. How many generations of kings had the stool held? Did it receive its power from the kings that sat in it, or did they receive their authority from the stool. The Luba masterworks bound culture together, remembered lessons from the ancestors, and provided ascendancy to the king. They meant as much to the Luba people as the Eucharist might to a member of the Roman Catholic Church. The traditional magic– the spirit of the Luba– was transubstantiated into them. Perhaps, in Geertz fashion, they could be described with a sort of “thick spirit.”

The woodworks of the Luba people did not represent power, they truly were power. Attempting to define them would be something tantamount to sacrilege, for they held within them the spirit of the Luba people. Even today in their gallery at LACMA, when one stands amongst their commanding presence, it is evident that they still do.

Go visit them at the third floor of the Hammer in LACMA.

Read about the show HERE. 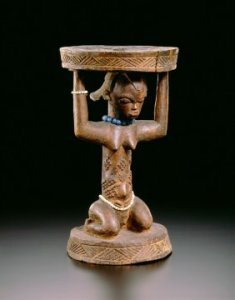 Husband, Father, Researcher, Bike Guy. I like to read stuff and to think about stuff and to fix stuff. Live Weird: Die Excellent

There was an error retrieving images from Instagram. An attempt will be remade in a few minutes.